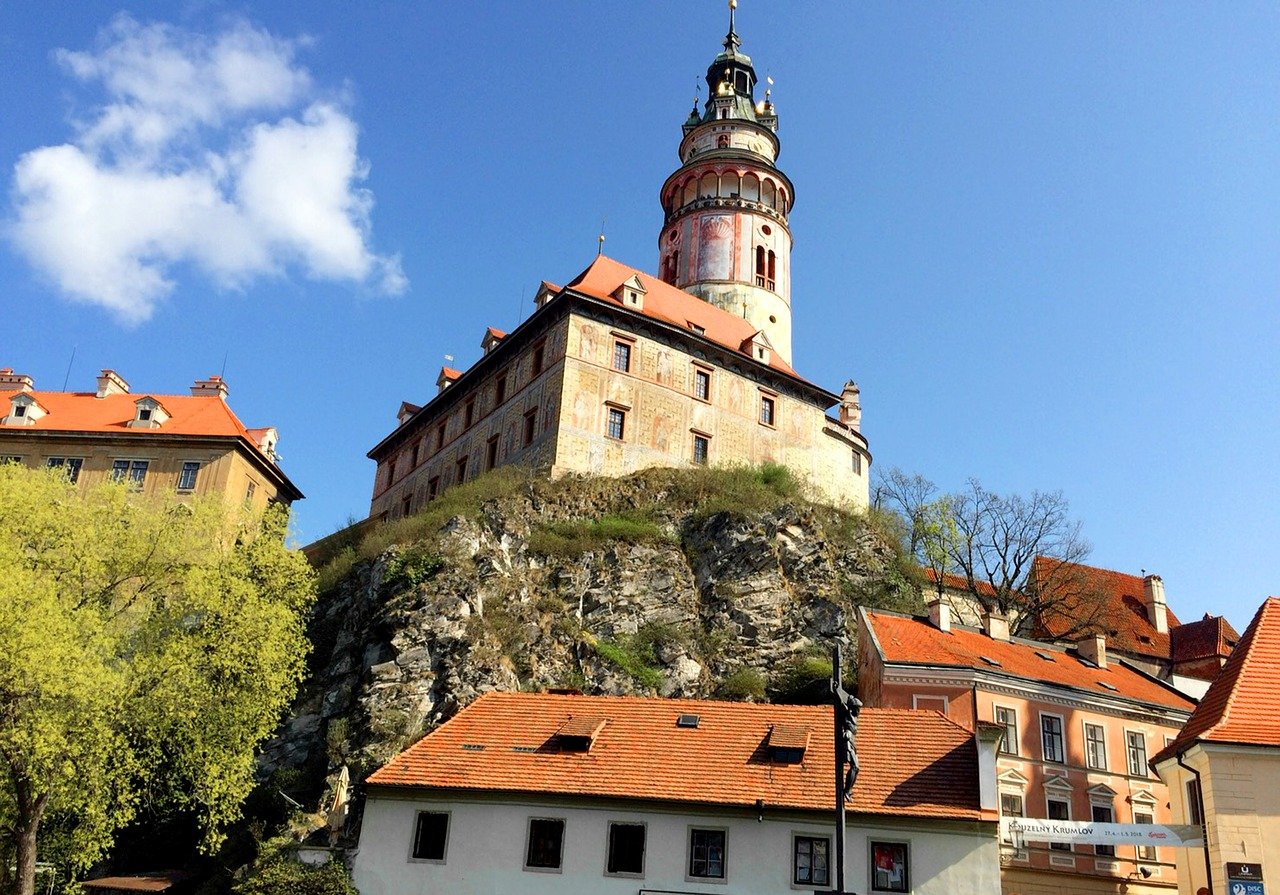 Are you interested in castles and nobility? Then visit Český Krumlov castle!

In this article, we will show you the highlights of Český Krumlov castle. You will learn why you should visit it, what to expect there and where and how to buy tickets.

The castle in Český Krumlov is the 2nd largest in Bohemia

Český Krumlov Castle is the 2nd largest castle in Bohemia. The area of ​​the chateau is more than 6 ha, which is only slightly less than in the case of the Prague Castle that is 7.28 ha and which is one of the largest castle complexes in the world.

Český Krumlov Castle consists of five courtyards, 40 buildings, and more than 350 rooms, some of which are open to the public.

Today, however, we will focus on the 1st castle tour. Not only because it is by far the most popular and almost 200,000 visitors from all over the world pass through every year, but also because at the tour you will learn the most important things about the life of the nobility in Český Krumlov and see rooms nobles used to live. You will see completely furnished rooms with expensive paintings, carpets, or bearskins, you will be shown the gilded carriage and end the tour in an impressive masquerade hall.

This chapel embodies the desire of the nobles for piety. It was exhibited as early as the Gothic period in 1334, and this date probably indicates the time when the construction of the so-called Upper Castle was completed. It’s also where this circuit takes place. The chapel was rebuilt in the Renaissance period and for the last time in the middle of the 18th century in the Rococo style. Inside you will find, for example, the Statue of St. George fighting a dragon, or you will see the remains of a saint stored in a glass box.

Renaissance halls, rooms and bedrooms of the last Rosenbergs

You will walk through the places where one of the last rulers of Český Krumlov, Vilém of Rosenberg, lived. He was the man who made Český Krumlov castle the 2nd biggest in the Czech Republic. You will see the painting „Dividing Roses,“ which captures the legend that Vítek of Prčice, the ruler of southern Bohemia, divided his dominium among his five sons. You can also admire rooms equipped with luxurious furniture and tapestries, which served as insulation of the cold castle.

The eccentricity of the nobles is quite well-known today, but there is one thing that has fascinated visitors to Český Krumlov for centuries. There are living bears at the castle.

The bears began to be bred in the 16th century by the Rosenbergs to show their ancestral affinity with the Italian Orsini family. The word Orsini comes from the word „orso,“ in Italian „bear,“ and therefore the last Rosenbergs placed bears not only in their family crest but also in the bear moat in front of the castle. If you want to know more about how many bears there are in Český Krumlov today, where they come from, and what they like to eat, we invite you for the Wiseman Free Tour where you learn that. The tour runs daily at 10:30 AM or 2 PM.

Bears have been bred in Český Krumlov for more than 400 years. When a bear dies, its skin is placed inside of the castle or it can be used as a decoration for helmets of the Schwarzenberg Guard. Do you have any idea how many such helmets can be made from one bear skin? If you want to know that, visit our tour of Český Krumlov in the 20th century.

The tour also includes a curiosity – a Renaissance toilet, or prevet, which leans out from the castle above the Vltava River. This toilet has its role in the bloodiest story of Český Krumlov about an emperor’s son who got insane at the castle. If you want to learn more about his tragic life and the brutal murder he committed in Český Krumlov, we recommend our Night Tour of Český Krumlov.

The construction of Český Krumlov Castle and Chateau took 500 years and there was no shortage of reconstructions. That’s why you can see not only renaissance but also baroque interiors at the castle.

A gilded carriage that rode only once

In one of the castle rooms, there is a real rarity, a gilded carriage, which was used in 1638 on the occasion of the visit of John Anthony of Eggenberg to the Vatican. The carriage is carved from walnut wood, gilded, and more than five and a half meters long. So it’s longer than a US President’s limousine. And even more interesting is the fact that it was used only once. In 1638 it was filled with gifts for the pope and six horses drew it on a 10 km long route.

The tour of the chateau ends with a visit to the magnificent dance hall from 1748. The masquerade hall is decorated with 135 figures indulging in playful carnival entertainment. All the characters are sculpted, casting their own shadow, conversing, and appears as they were leaning out of the walls. The entrance to the hall is guarded by two soldiers – members of the Schwarzenberg Guard, which you have already heard about (they have helmets decorated with the bearskin). The hall has excellent acoustics and therefore still hosts concerts and music festivals.

Practical information about the castle tour no.1

The 1st tour opens on April 25 and closes on October 31. Tours take place from 9 am to 5 pm (respectively until 4 pm in September and October). Detailed information on opening hours can be found on the Český Krumlov Castle website.

Tickets for this and other castle circuits can be purchased at the 2nd courtyard of Český Krumlov Castle, or online on the castle’s website.

The tour can be completed only as part of a guided tour (in the summer season even on Mondays) daily at 10:50 AM and 2:30 PM.

We also recommend joining the Baroque theater tour at 10:00 AM which takes 45 minutes and starts at the 5th courtyard of the castle. At 10:45 AM the tour is over and after that, you can easily join the castle tour no.1 which starts at the 3rd courtyard at 10:50 AM and is 55 minutes long.

Admission is 210 CZK per person (discount for seniors, students, and children).

If you are looking for an introduction to the life of the nobility in Český Krumlov and you like castles and chateaux, then the 1st tour is for you.

And if you want to get to know Český Krumlov in-depth and professionally, we recommend the Wiseman Free Walking Tour.